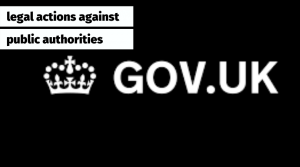 The Public Interest Law Centre works to hold the State to account and seeks to bring private law claims against a range of public bodies including:

We also aim to bring claims against these organisations too – we argue they carry out a public function (that is as a substitute for the State) and therefore can and should be held accountable.

All our work is conducted under legal aid although we will try our best to look to alternative fee arrangements such as Conditional Fee Agreements.

Our legal aid contract of actions against the police is an area of our work we hope to develop in 2019.