On May Day, we remember the dead and fight for the living

May Day is celebrated internationally on 1 May. It is a day to commemorate the struggles of working-class 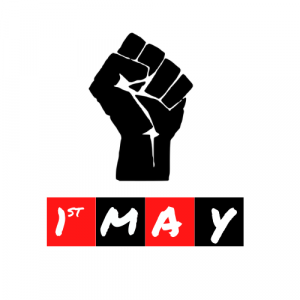 and marginalised communities against oppression.

In this special May Day guest blog John Bryan—retired building worker and blacklisted trade unionist—shares his personal recollections of battles over safety at work.

On this day I always bring to mind those workers physically and emotionally damaged by their work conditions—and by the stress of ‘blacklisting’.

When I started working in construction in the 1970s you always knew who the foreman and chargehands were—they were the ones with hard hats! Changing rooms were a wooden shed with a bench with six-inch nails knocked into the wall to hang your jacket and personal stuff. You had to hide your tools as best you could as there were hardly any lockups. Toilet facilities were large buckets on each floor or out on the scaffold. A labourer got 50p a day extra ‘dirty’ money to clean the buckets every day and disinfect them.

The only women on site were employed as secretaries. They had their own portaloos. You had to ask at the stores for safety gloves and a hard hat, which the storemen (company men) were always reluctant to give you. They acted as if the equipment was theirs.

On average, six building workers were killed on site every month. Others suffered injuries—many of them life-changing. The canteens were usually run by the partners or families of the site foremen, so if you weren’t hit on the head by a falling brick or a piece of wood they got you with norovirus! If you raised any of these issues with the trades’ foreman, they would come out with the old macho nonsense: “We are building workers, not office workers”. Even factory conditions were better.

I always tried to work directly for the company, but there were other ways of working, like the  self-employed ‘lump’. You could be ‘working direct’ for the main contractor at one end of the site. At the other end another gang would be doing similar work ‘on the lump’. The foreman would often try to stir it up between the gangs for fun and divide-and-rule.

Sometimes I had to work ‘on the lump’. I had a family and needed the money. To get paid I had to go to the pub of a sub-contractor’s mate and wait for him to turn up with my wages. I was spending money I did not have waiting for wages I might not get!

I would say to the other men, ‘We shouldn’t have to work like this’, and they would reply, ‘What can we do about it?’ When I suggested the construction workers union, UCATT, they would laugh, saying: ‘They are all bent!’

The construction industry was the original gig economy. The 1972 national building strike won a significant pay rise but did not deal with bogus self-employment or the blacklisting of trade unionists for fighting against poor conditions on site. The conspiracy trial of 24 building workers in Shrewsbury and Birmingham led to some being imprisoned. Des Warren and Ricky Tomlinson spent thirty-one days on hunger strike protesting that they were political prisoners. Only recently, after forty-eight years, were they finally acquitted of any wrongdoing.

In 1978 I was working on a large government refurbishment job for Taylor Woodrow. who were a large construction company at the time. Two Northern Irish lads came up to me and said they were trying to organise a union shop on site. We talked about the issues on site, mainly the lack of safety, and I joined.

When I spoke to the older men on site, they said they liked what I was doing but that I would end up being blacklisted. I had heard of the Hollywood blacklist, but in my naivety I thought that the worst that would happen was that I would not work for Taylor Woodrow again. I did not realise that there was an industry-wide blacklist.

One of the main issues on the site was the large fixed crane on the seventh floor of the building. Siting the crane there meant that the driver in the cab could not see what was happening below on the site and on the street where deliveries were made. This resulted in several accidents, including one worker losing his finger.

In the end, we had to take strike action over the crane issue. We were on strike for ten days with full support of those on site, but Taylor Woodrow called the police alleging intimidation and threats. Despite this, we won the dispute: the crane was repositioned; a shop steward did inspections and checks; all workers had hard hats and safety gloves; and there was no ‘lump’ labour on site. We had the help and support of a decent regional union official, which was a rare occurrence in those days.

The mental toll of blacklisting

In construction you work yourself out of a job from the day you start on site. Eighteen months later the job was finished, and I was out of work. From then on, I struggled to get work from the big construction companies and only got short term work with smallish sub-contractors.

The toll on my mental health was considerable. I often went to large sites for work, was accepted by the foreman or site agent—only to be told to leave half an hour later as my name ‘didn’t check out’ with the company’s head office.

I was in and out of work for over twelve years. Friends and relations couldn’t understand why I couldn’t secure regular work as they could see tower cranes all over London. When I told them about the blacklist, I could see they didn’t believe me.

In 2009 the Information Commissioner’s Office (ICO) raided a nondescript office in Nuneaton after a tip off. They found 3,200 blacklist files in and around the main desks, with many thousands of others in the filing cabinets. The ICO took the files that were in and around the desks, but left those in the filing cabinets as they thought they had enough to justify the raid. One of the files taken was mine. The thousands of files left in those cabinets were sadly destroyed after the raid. 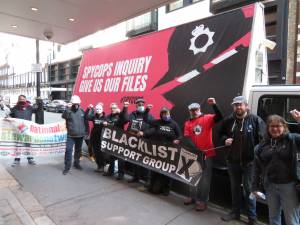 I subsequently got involved with the Blacklist Support Group. We fought a six-year court case against the big multinational building companies. They claimed my experiences and those of other trade unionists were down to an ‘over-zealous HR department’ rather than a national criminal conspiracy to blacklist activists who fought for better pay and conditions.

We secured compensation and an apology (for getting caught)—but no real justice. No-one appeared in court and no big company director was prosecuted.

During the pandemic construction sites have remained open. Building workers have gone into work throughout Covid-19, nearly all using public transport. They have put themselves, their families and other people at risk. You cannot construct buildings working from home or in isolation: construction is a physical and team effort. There have been at least two thousand coronavirus-related deaths in the industry.

Of course, the directors of the companies live in their multimillion-pound houses in splendid isolation. Building workers’ lives have always been cheap.

There are construction sites all over London. With a mayor friendly to big business and multinational developers, who are these opportunities for? Not the local communities whose needs are being overridden for the sake of the greed and the social-engineering ideals of planners.

On May Day I like to think of the good union activists who are no longer with us. We need to think of the past and learn from it, but also fight for the present and the future. This means supporting young organisers like the Independent Workers of Great Britain (IWGB) union in what is now the ‘new’ gig economy.

This is an adapted version of an article that first appeared on the website Left Horizons. It is reproduced here by permission of the author.