On Tuesday 22nd October at 9am 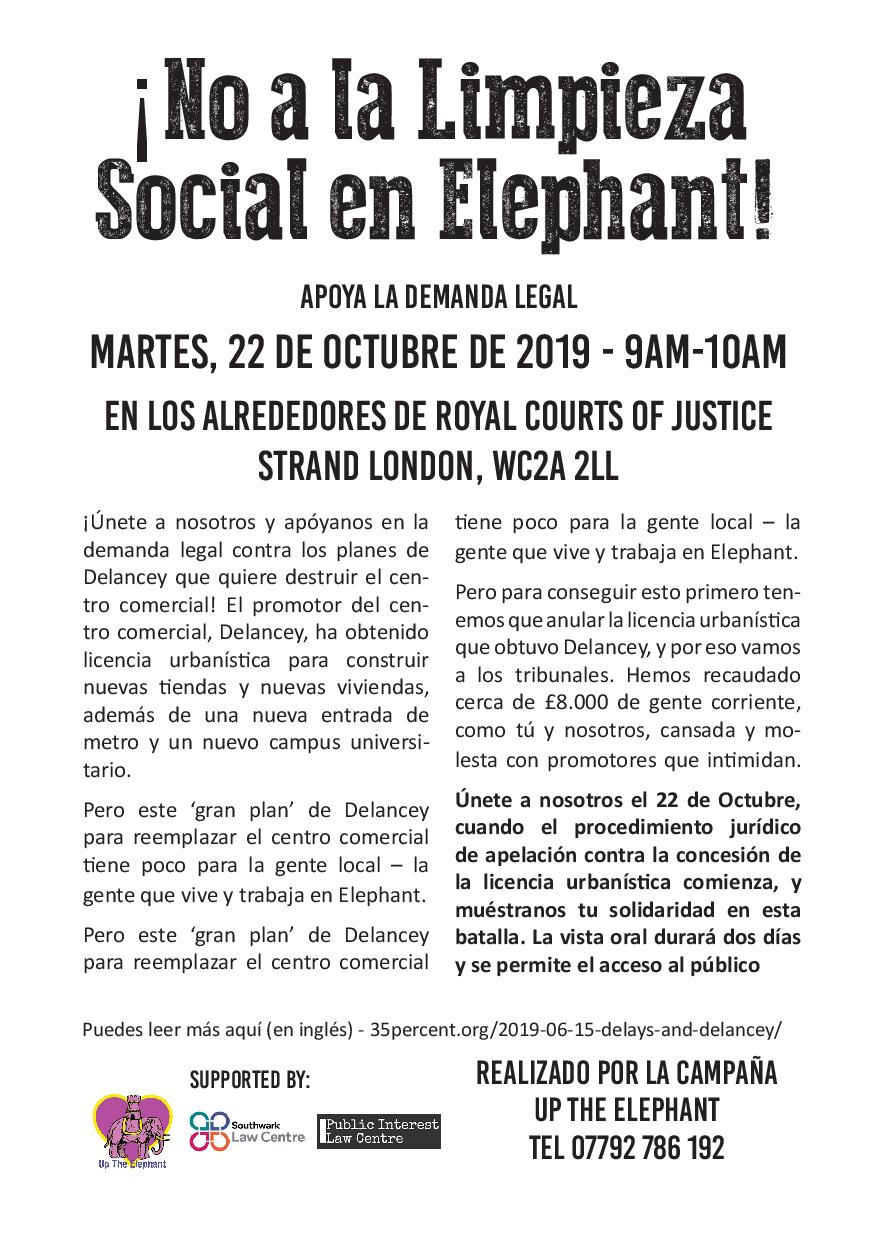 there will be a solidarity demonstration outside the High Court to coincide with the start of the two-day hearing of Public Interest Law Centre’s judicial review of the proposed development of the Elephant and Castle shopping centre.

For the inaugural PILC blog, we asked senior solicitor Paul Heron about the case and its wider significance.

Can you tell us a bit about the case and what’s at stake for the local community?

In essence this case is about ensuring that the new Elephant and Castle development provides a maximum amount of genuinely affordable housing for the local community. Our challenge centres on the agreement between Southwark and the developer, Delancey, around the number of social housing units to be provided through the project.

Whilst social housing for working-class, migrant and ethnic-minority communities is the central issue, it is not the only thing at stake. Local traders are dissatisfied with the way the development scheme has been handled by Southwark. Some will not get spots in the new development while others will see their rents rise. We hope a positive outcome in this case will encourage Southwark to think again about their ‘regeneration’ agenda and its impact on the local community.

What are the key legal issues that the judge is going to be deciding upon during the hearing?

We are challenging whether the development scheme as proposed by Delancey is in line with Southwark’s planning policy. Delancey have claimed the most they can deliver in terms of affordable housing is 116 social housing units—out of nearly 1000 apartments that will be built. But they made this offer before claiming to have secured a GLA grant of £11.25 million! The local community want the GLA grant to be used to increase the provision of social rented units—instead of bolstering Delancey’s profit margin.

We think Southwark have undersold themselves with this development, possibly as a result of not understanding what they could get.

We’re also concerned that there may actually be insufficient money to complete the scheme and that even the paltry commitment of 116 social housing units will not be met. Southwark have given Delancey land and planning permission on the condition they provide a specified number of units. But there’s the prospect of Delancey turning round and saying to Southwark ‘we will give you money instead’. The sum offered in such a scenario is likely to be inadequate to the task and the units may not be built.

Defending housing as lived space against profit-driven development means mobilising communities. How have you worked with campaign groups to bring this case to court?

The groups we’ve worked with are Up the Elephant, 35% Campaign, Southwark Defend Council Housing and Latin Elephant. We’ve also reached out to traders.

These campaigners are massively involved in our case and they’ve been crucial to the JR being brought. One or two have a real interest in planning law and are veterans of the Aylesbury and Heygate Estate campaigns. Our case has benefitted from both their expertise and their links with the local community.

The campaigners have been involved at every stage. We’ve met with them to discuss what victory might looks like and how to press home the advantage from a win in court. We’ve also worked with them to plan for the possibility of defeat.

The judicial review had been brought on a crowdfunding basis. Because it’s an environmental case we have been able to engage Aarhus Convention rules to cap our client’s costs. The campaign has done a brilliant job in raising the £5000 needed to protect the client.

On October 22nd a coach full of campaigners will be coming up from the Elephant. They’ll be outside the High Court to remind the judge of the extent of local opposition to the way this development has been carried out.

The effect of displacement due to ‘urban renegeration’ in cities around the world has been compared to the devastation caused by war and natural disasters.[1] What do you think are the broader implications of this case for anti-gentrification campaigners? Are we in an era where the best we can hope for is to limit the damage caused by profit-driven development?

There’s an extent to which we are talking about damage limitation. Opposing these kinds of projects in London is generally a rearguard action of one sort of another, especially in boroughs like Southwark, Newham and Haringey where the Labour party establishment has traditionally been right wing and ardently pro-‘regeneration’.

Our strategy has been to use the threat—and reality—of legal action to wring concessions out of councils with respect to local residents and traders.  The message needs to be ‘we’re watching you—go back and make a better decision’.

We believe that a strong fight—and ideally victory—in cases like these can provide a springboard for future campaigns and re-galvanise community action against the commodification of lived space. In the context of broader developments in Southwark and elsewhere, that would be a pretty substantial result.