‘There’s nothing wrong with him. He just doesn’t fancy sleeping on the streets.’

EU citizens sleeping rough face direct and indirect discrimination when it comes to accessing the NHS. The situation is likely to get worse now Britain has left the EU. 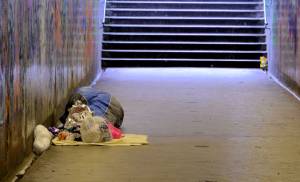 One of our homeless clients attended a hospital appointment last month after an urgent referral from his GP. He was turned away. A member of hospital staff told the person accompanying him: ‘There’s nothing wrong with him. He just doesn’t fancy sleeping on the streets.’

Our client died a week later.

It’s still not clear exactly what happened in this case. But the dismissive reception our client received at hospital will surprise nobody who has worked with rough sleepers—or been one.

Most at the front line have at one time or another received a phone call to say a rough sleeper they knew has died. One charity we work with has lost five of their EU homeless members in the past year. Often the rough sleeper concerned will have sought medical treatment in the days before their death.

Living outside is associated with a range of health conditions, from hypothermia to malnutrition. Rough sleepers are more likely than other people to be the victims of violence. There is also a strong correlation between street homelessness and psychological distress, including the ‘dual diagnosis’ of mental health issues and substance misuse.

Homelessness charities hammer home the message about the dangers of rough sleeping. The truism that ‘rough sleeping is dangerous’ has been used as a specious justification for sharing information about homeless people for immigration enforcement purposes.

Less attention is paid to the raw deal rough sleepers get from the NHS. Street homeless people are subject to direct and indirect discrimination when it comes to healthcare, both on a day-to-day basis and in an emergency.

Another of our EU clients went to A&E twice complaining of swollen feet and legs. He was turned away both times. He was only admitted after we sent a volunteer to accompany him. He spent seven weeks in hospital with a serious infection.

It’s important to note that there are some brilliant GP surgeries and secondary services working with rough sleepers, including specialist practices. Nor should the blame for poor treatment be loaded onto individual NHS staff, who operate under incredibly challenging conditions.

The problems are systemic. From GP practices which refuse to register people of ‘no fixed abode’ to healthcare workers who think rough sleepers only come to hospital to scrounge a bed—the barriers homeless people face in accessing NHS care are underpinned by fallacious narratives that blame homelessness on individuals’ ‘bad choices’ and ignore the structural factors that keep people on the streets.

Rough sleepers from the EU face very specific obstacles to accessing healthcare, including a startling lack of knowledge among NHS workers about the rights of EU citizens.

We’ve seen emails from professionals stating that a seriously ill rough sleeper should only be referred for tests ‘once he has regularized his immigration status’. We had to point out that EU nationals living in the UK should not be barred from, or charged for, using the NHS.

The UK’s healthcare system is residence-based. This means entitlement to healthcare is based on ordinary residence:

To be ‘ordinarily resident’ an EEA national must be:

1) lawfully in the UK
2) here ‘voluntarily’; and
3) ‘properly settled for the time being’

The overwhelming majority of EU nationals will meet this test almost all the time. Despite this we’ve had to write to NHS trusts asking them to withdraw bills for treatment sent to homeless Europeans.

To be clear: EU nationals resident in the UK enjoy most of the same rights to healthcare as UK nationals.

For now, at least.

Britain’s departure from the EU on January 31st makes access to healthcare for homeless migrants an ever more urgent issue. Foreign nationals still make up more than 50% of the rough sleeping population in parts of the country—and it’s often an immigration issue that keeps them on the streets.

It’s not yet clear what new rules the government will dream up for European homeless people now that Britain has left the EU. In the meantime the rest of us need to stand up for the right to healthcare of a group who are still human and still here.