Will COP26 solve the climate crisis – or will it be a cop out?

As politicians and protestors gather in Glasgow for the UN climate change conference, PILC senior solicitor Paul Heron blogs about the role strategic litigation should play within the mass movement required to tackle the climate emergency. 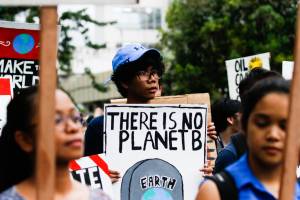 The latest report to the UN of the Intergovernmental Panel on Climate Change (IPCC) contains stark warnings—and calls the current situation faced by our planet a ‘Code Red.’ Without decisive action to cut greenhouse emissions, there is little prospect of keeping average global temperature increases down to the 1.5 or 2 degrees Celsius targeted in the 2015 COP21 Paris Agreement.

Paris was the first time an agreement had been reached on reducing carbon emissions. But the targets set there were not nearly ambitious enough. Major polluting industries like aviation and shipping were excluded from the legal agreement, which also lacked any clear mechanism for holding failing parties to account.

Above all, the Paris Agreement reflected the blind faith of many of its signatories in the free market and its mechanisms. The failure of COP21 is ultimately a failure of neoliberal economics—and a failure to appreciate that action against climate change needs to involve economic and social change on a systemic scale.

The reality of climate change

The last twelve to eighteen months have helped bring home the crushing reality of the climate crisis. Flooding and hurricanes have affected hundreds of thousands of people across the world, while wildfires in Greece and Turkey led the news in the summer of 2021. The fires in Greece were made worse by domestic austerity and the European Union’s (EU) pro-corporate policies.

In Siberia and the Russian Far East, even bigger fires raged over a vast area, with smoke detected as far north as the North Pole. In Madagascar, a major drought left 1.1 million people without food, with aid agencies calling the disaster the first famine caused solely by climate change.

Estimates of the number of people likely to be displaced as a result of climate change vary dramatically. The most cited figure suggests that by 2050, 143 million people will have been forced to migrate as a result of failed harvests, droughts and flooding. Another study estimates that by 2100 some two billion people may be climate refugees.

The IPCC is not alone in calling for immediate and decisive action from governments. In June 2021 the United Nations’ World Meteorological Organisation called 2021 ‘a make-or-break year for climate action’, noting that ‘the window to prevent the worst impacts of climate change—which include ever more frequent more intense droughts, floods and storms—is closing rapidly.’

In 2020, the concentration of carbon dioxide in the atmosphere reached 417 parts per million, a level not seen since the Pliocene era three to five million years ago, when global temperatures were between 1.8 to 3.6 degrees higher than today. Internationally 2020 tied with 2016 as the warmest year on record—and in Europe it was the hottest year ever. The time to act was yesterday, yet world leaders tied to the global neo-liberal model are incapable of acting. 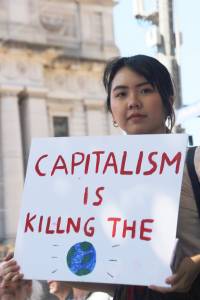 A key reason why intergovernmental efforts to address climate change continue to fail is that their principal strategies are rooted in the current economic system. The solutions so far offered through COP primarily involve emissions-trading schemes, or carbon offsetting.

Such schemes are grounded in a profit-driven system that ties corporate interests to climate solutions. Corporations are centrally motivated by profit, not by dealing with climate change—and it is no secret that 100 companies are responsible for 71% of global emissions causing global warming. Yet the market is effectively being trusted to solve environmental problems. There is no evidence that such an approach works, but plenty of evidence that it is failing.

The idea that natural resources—land, air, forests, water—can and should be turned into commodities encapsulates is wrong with the neoliberal economic model.

Can law and strategic litigation save the planet?

Lawyers have a role in holding power to account around climate change. Organisations such as Client Earth and Plan B are increasingly bringing legal challenges, with varying degrees of success. But individual casework, even where undertaken strategically to raise awareness or stop a piece of legislation in its tracks, is likely to achieve only temporary success.

It is our view that litigation as a strategy of resistance needs to be embedded within the environmental movement. For one thing, and as Michael Ratner of the Center for Constitutional Rights has pointed out: ‘[W]ithout pressure from social movements its harder to win in courts.’[1]

Litigation is one tactic among others that campaigners can draw on. It has an important part to play but should always be subordinate to the broader interests and strategy of the movement. 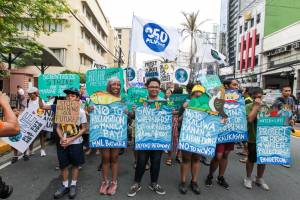 The COP has faced many protests over the years, with the Copenhagen and Paris versions seeing protest on a global scale. COP26 represents a huge opportunity to galvanise the new mass movement against climate change that has emerged since 2019.

Young people, poor countries and the working class will bear the brunt of emissions-related climate change. Marginalised communities, trade unions and people from the Global South must therefore be central to the new environmental alliance. Since time is not on our side, the work of building such a movement needs to be done now—with lawyers playing a modest but strategic role.