Liverpool says no to AOC Europe 2021!

Liverpool says no to AOC Europe 2021!

We’re proud to have been instructed by a social justice campaigner who, as part of Liverpool Against the Arms Fair, is fighting to prevent the city’s ACC exhibition centre playing host to a major weapons event next month.

Arms fairs are central to the operation of the weapons industry. They provide dealers with the opportunity to network and do business with military procurers and government officials. Crucially, they allow weapons sales to be carried out in an atmosphere which normalises the existence of the arms trade. 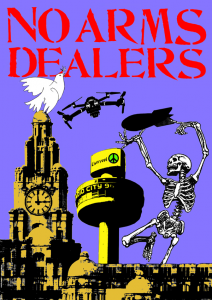 expenditure is expected to reach the $2 trillion mark by the end of 2021. The opportunities available for companies are at its [sic] highest for decades.”

Today the world is watching human misery and chaos unfold in Afghanistan. Allowing AOC Europe the use of the council-owned ACC venue will lend a veneer of respectability to a deadly trade. An arms fair may look like any other conference. But the hardware on sale is designed to kill and injure. Weapons on display are likely to breach international humanitarian law and international human rights law.

At the time of writing, the event has attracted over 85 exhibitors and is expecting over 1250 industry attendees. It will bring together government and the defence industry, connecting sellers with purchasers to facilitate major arms sales for the battlefield. It will also consider the latest advances in weaponry.

We understand that among the arms manufacturers set to exhibit at the fair are the Israeli companies Elbit Systems, Rafael and Elta Systems. These companies advertise weapons as ‘battle tested’—meaning they have been used in Israel’s brutal repression of the Palestinian people. Other attendees are likely to include MDBA and Raytheon, which have provided Saudi Arabia with weapons to carry out its murderous offensive in Yemen.

On behalf of our client we have written a pre-action letter to the Mayor of Liverpool asking her to cancel the arms fair. If she refuses, we will consider legal options including a judicial review of that decision. Meanwhile, a demonstration against AOC Europe 2021 will take place in the city this coming Saturday.

In 2020, the same arms fair was scheduled to take place at this same venue. The people of Liverpool campaigned and stopped it from happening. Once again, the local community is saying no—they don’t want war profiteers to gather in their city, let alone in a council-owned building.