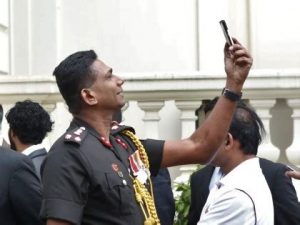 The Judge, at Westminster’s Magistrates Court, issued a warrant for Mr Fernando’s arrest. If he returns to the UK he is likely to be arrested on arrival as the police have now been made aware of the warrant.

Mr Andige Priyanka Induni Fernando, otherwise known as ‘Brigadier Fernando’ was taken to court following the emergence of a video taken during the country’s Independence Day celebrations in London. In the video, Mr Fernando is seen repeatedly running his forefinger across his throat whilst maintaining eye contact with the protestors.

Protestors who were present outside the Sri Lankan embassy last February, and who were the targets of Mr Fernando’s threats, were represented today by lawyers at the Public Interest Law Centre.

Mr Fernando was found guilty under Section 4A and Section 5 of the Public Order Act 1986. The protestors claimed that Mr. Fernando’s behaviour had been threatening and intended to cause harassment and alarm to the protestors.

Following the sentencing, at Westminster Magistrate’s Court, a spokesperson from PILC said that the Centre, on behalf of its clients, “Would now be appealing to the Home and Foreign Secretaries for reassurance that the UK will be taking steps to ensure full cooperation by the Sri Lankan authorities in returning Mr. Fernando to the UK for arrest.”

“This is a great result – the culture of impunity enjoyed by Sri Lankan officials has been challenged today. Mr Brigadier Fernando, part of a military force who has allegedly committed war crimes, will no longer be able to evade accountability for his actions here in the UK.”

PILC will be seeking clarification from the Foreign Office that they will take steps to contact the Sri Lankan government for the Brigadier to be returned to the UK.