On Friday 1st March 2019 the Chief Magistrate of England and Wales, 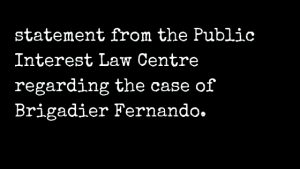 ruled that Brigadier Priyanka Fernando, a former Sri Lankan Defence Attaché, will face a retrial on 7th May 2019.

On 4th February 2018  Brigadier Fernando was filmed, whilst on duty in his military uniform, making  a number of cut throat gestures to the peaceful protestors who were situated opposite the Sri Lankan High Commission. The protest had been called by Tamil Solidarity.

Three protesters instructed the Public Interest Law Centre through the International Centre for Prevention and Prosecution of Genocide (ICPPG).

There have been a number of subsequent hearings:

On 21st January 2019, Brigadier Fernando was convicted (in his absence) of threatening the protestors and a warrant for his arrest was issued. The warrant was subsequently withdrawn

On 1st February 2019 and later the 1st March 2019 arguments were heard that Brigadier Fernando actions were covered by indefinite immunity. The argument being they were within his ‘official duties’ to monitor anti-Sri Lankan activities and report them to the Sri Lankan High Commission. In reliance of this the Defence supplied to the Court his job description. That provides the Brigadier was officially authorised by the Sri Lankan Government to “Monitor any anti-Sri Lankan activities in the UK and report to the High Commissioner and through her to the Intelligent Agencies in Sri Lanka” – therefore any actions taken – presumably slit throat gestures were also authorised. This argument was rejected by the Chief Magistrate.

“It was not part of Brigadier Fernando’s job description to make the alleged cut-throat gestures on the three occasions, it could not be any part of the mission’s function and therefore the Minister Counsellor’s behaviour is not given immunity by Article 39(2) of the Vienna Convention. The Brigadier cannot call on the residual immunity that he would have been able to had the acts been performed in the exercise of this functions.”

The Defence then made an application under s.142 of the Magistrates’ Court Act to have the conviction set aside. The case was adjourned to 15th March 2019 to deal with that application.

At the hearing on 15th March 2019, the Defence argued that there had been procedural mistakes in this case which meant that the conviction was invalid. The Chief Magistrate agreed. That was largely on the mistakes made by the Court in its failure to disclose a letter from the Sri Lankan government to the private prosecutors and presumably the Defence. As a result the conviction was quashed.

A retrial will be held at 2pm, 7th May 2019 at Westminster Magistrates Court.