On Monday 21st January 2019 a high-ranking Sri Lankan military official will face private prosecution at the Magistrates Court. Mr Andige Priyanka Induni Fernando, otherwise known as ‘Brigadier Fernando’, has been accused of running his fingers across his throat, at a public event, in order to threaten Tamil protestors. He will be prosecuted under the Public Order Act 1986, for using threatening behaviour and visible representations whereby the victim is likely to believe that such violence will be used. 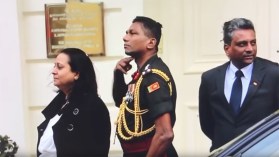 In early 2018  protestors were gathered outside the Sri Lankan Embassy in London, protesting against the treatment of Tamils by the Sir Lankan Government. Embassy and Consular staff had gathered to celebrate Sri Lankan Independence Day. Brigadier Fernando was attending the celebrations.

Brigadier Fernando filmed protestors from outside the embassy before returning inside. He returned and made gestures towards the protestors, repeatedly running his forefinger across his throat whilst maintaining eye contact with the protestors.  The video of him, in full military dress uniform, doing this in front of the High Commission went viral.

The Public Interest Law Centre will take the case to Westminster Magistrates Court on 21 January 2019 on behalf of their clients who were attending the protests. Brigadier Fernando had looked directly at them whilst making the threatening gestures – after videoing them – causing them to fear the threats would be carried out against them.

The private prosecutors will rely upon the statements of witnesses present at the scene and upon a video recording which captures the behaviour of the defendant, who can be clearly seen to imitate the slitting of the throat.  This was clearly directed towards PILC’s clients and other protestors present at the scene and was intended to cause them fear of violence, alarm or distress.

As a report prepared by Journalists for Democracy in Sri Lanka & the International Truth & Justice Project noted:

“In a context where members of the Sri Lankan military have been accused of a wide range of war crimes including summary execution that in some instances involved the slitting of throats of bound Tamil detainees, the gesture was deliberate and intended to inspire fear. More so given that photographs of Tamil protests abroad are routinely the subject of questions during interrogations and torture in Sri Lanka itself.”