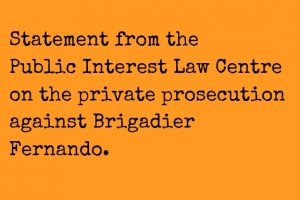 throughout as ‘the Defendant’] is a Sri Lankan military official who, in the past, has carried out military operations during the civil war in Sri Lanka.[1]He was found guilty by Westminster Magistrates’ Court of offences under s.4A and s.5 Public Order Act 1986 on Monday 21 January 2019.

In 2017, Brigadier Fernando was posted to the United Kingdom as the Sri Lankan High Commission’s Minister Counsellor (Defence).[2]On the 4thFebruary 2018, protestors (including the victims) went to the Sri Lankan Embassy in London, to protest against the Sri Lankan Government and their treatment of Tamils. The Defendant with other Embassy and Consular staff had gathered to celebrate Sri Lankan Independence Day.

The Defendant initially came outside the embassy and started filming the protestors using his mobile phone before returning to the Embassy. He then made ‘cut throat’ gestures towards the protestors. He repeatedly ran his forefinger across his throat while looking at the protestors causing them fear, alarm and distress. The video of him, in full military dress uniform, making the threat in front of the Sri Lankan High Commission went viral.[3]

An information was laid on 6 February 2018 and a summons issued by Westminster Magistrates Court on 22 February 2018. The summons were first served on 7 March 2018 to the Sri Lankan High Commission and to his home address in the UK; a fresh summons and the complete bundle of prosecution documents were served on 28 October 2018 to the Ministry of Defence and the Brigadier’s home address in Sri Lanka  via an international process server. Following a Court order granting permission to serve documents through facebook, the summons and bundle were served directly to the Defendant through his personal Facebook account, and also by registered post.

At the trial listing on Monday, 21 January 2019, the Prosecution applied to proceed in the Defendant’s absence because he had failed to appear. The Court were satisfied that he had been given due notice and proceeded to hear evidence from Majuran Sathananthan, Golulakrishnan Narayanasamy, Palliya Guruge Vinoth Priyantha Perera, Sockalingam Yogalingam and Sabeshraj Sathiyamoorthy. The Bench then found the Defendant guilty of s.4A and s.5 PO Act 1986 offences.

The Magistrates issued a warrant for Brigadier Fernando’s arrest after finding him guilty of the charges so that he could be produced for sentencing if he were to return to the UK.

Following the trial, Public Interest Law Centre was contacted by Westminster Magistrates’ Court and was informed that the arrest warrant had been withdrawn and the matter relisted on 1 February 2019. The Court did not relist the matter before withdrawing the arrest warrant.

The Court asked the UK Foreign and Commonwealth Office (FCO) to confirm whether the Brigadier enjoys immunity from prosecution.

After the 21stJanuary 2019 hearing, it has come to our attention, that the Sri Lankan Government acknowledged the proceedings in November 2018 and elected not to participate in the proceedings. A Sri Lankan Foreign Ministry spokesman, Saroja Sirisena, has also said publicly that the Sri Lankan Government had made submissions to the UK Foreign and Commonwealth Office (FCO) objecting to the ruling of the court. According to Mr Sirisena, the FCO then contacted the Westminster Magistrates Court regarding those objections.[4] It is unclear on what basis the FCO has sought to intervene in the judicial process.

In our view the trial was heard on 21 January 2019 and proceedings concluded. It appears that the Brigadier Fernando and the Sri Lankan Government had sought to frustrate proceedings by electing not to participate in the hearing.

As this has proven ineffective, the Sri Lankan Government are attempting to retrospectively make arguments that could have been made if a representative appeared before the Court  on 21 January 2019 or well in advance.

Even if the Defendant had attempted to invoke immunity at the Trial, in our view he would not have been successful. Immunity cannot be invoked in order to defend a diplomat from all unlawful acts indefinitely. It is our view that Brigadier Fernando does not have the protection of diplomatic immunity for the following reasons.

Article 39(2) of the Vienna Convention on Diplomatic Relations 1961, states that:

“When the functions of a person enjoying privileges and immunities have come to an end, such privileges and immunities shall normally cease at the moment when he leaves the country, or on expiry of a reasonable period in which to do so, but shall subsist until that time, even in case of armed conflict. However, with respect to acts performed by such a person in the exercise of his functions as a member of the mission, immunity shall continue to subsist.”

This is incorporated into UK law in the Diplomatic Privileges Act 1964. It provides that immunity ends a reasonable time after the diplomat leaves their post (CPS practice provides for 31 days).

Immunity will onlybe maintained thereafter for any activities he carried out inthecourseofhisofficialduties. This is not unusual and proceedings have been successfully brought in the past against ex-diplomats.[5]

Immediately after the threats made by Brigadier Fernando – the Sri Lankan Government not only stripped him of his position (and therefore, we argue, of his immunity) but they also sent him back to Sri Lanka.[6]Brigadier Fernando is no longer listed on the 2019 London Diplomat List and therefore is no longer a diplomat in the UK.[7]He no longer comes under the protection of Article 31 of the Vienna Convention in respect of proceedings in England and Wales.

We note in a press release following the incident the Ministry of Foreign Affairs stated as follows:

‘Authorities in Sri Lanka have taken serious note of videos being circulated on social and web-based media of an alleged incident involving the Minister counsellor (Defence) attached to the Sri Lanka High Commission in London behaving in an offensive manner.

In this connection, instructions have been sent to Sri Lanka’s High Commissioner in London today, 6 February 2018, to suspend the Minister Counsellor (Defence) from work, with immediate effect. Authorities in Sri Lanka including the Sri Lanka Army will initiate inquiries on the incident immediately.’

Recent statements by the Sri Lankan Government spokesperson questioning the jurisdiction of the Court are at odds with the earlier commitment to deal with this serious incident.

[2]THE LONDON DIPLOMATIC LIST as of 6 October 2017, viewed at https://p10.secure.hostingprod.com/@spyblog.org.uk/ssl/ldl/London_Diplomatic_List_-_October_2017.htm

[6]Brigadier Fernando is not listed on the 2019 London Diplomat List available at: https://www.gov.uk/government/publications/foreign-embassies-in-the-uk