On 21st January 2019 Brigadier Fernando was convicted in his absence and an arrest warrant was issued. The offences of which he was convicted were 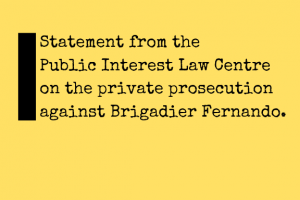 serious examples of their kind, and committed on the streets of London.

On 1st February 2019 the Chief Magistrate asked for the a hearing having withdrawn the arrest warrant. The purpose of the hearing was to consider whether Brigadier Fernando benefited from diplomatic immunity.

It is our view that the Brigadier no longer enjoys diplomatic immunity for actions committed in his private capacity having left his post further to article 39(2) of the Vienna Convention.

The Public Interest Law Centre along with our counsel agreed with the Court that the matter of diplomatic immunity should be argued at a full hearing on the 1st March 2019. This will allow the Brigadiers legal team to present further legal submissions to the Court.

Recent press coverage of the case can be read here in the Morning Star and the Guardian.