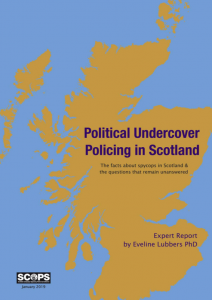 Today, the Scottish Campaign Opposing Police Surveillance (SCOPS) release their report Political Undercover Policing – Scotland.’  There is a clear need for the Justice Secretary in Scotland – Humza Yousaf MSP – to urgently review the evidence presented in this report and to order an independent and transparent public inquiry into undercover political policing in Scotland.

On 16th July 2015 Theresa May, then Home Secretary, announced a public inquiry into undercover policing. This announcement followed revelations that police officers spied on political campaigns and in some cases de-railed them. The officers had intimate relationships with women, fathered children, and in some cases acted as agent provocateurs.

Undercover political policing in Scotland is extensively documented in the attached report – Political Undercover Policing in Scotland –this was commissioned for the case we brought on behalf of our client Tilly Gifford. The report has now been published through the Scottish Campaign Opposing Police Surveillance (SCOPS). You can view that report here.

Despite proof that dozens of activists were spied upon in Scotland, the public inquiry into these violations has been limited only to England and to Wales. However, the need for an inquiry into undercover political policing required north of the border.

The case brought by our client Tilly Gifford sought to commit the either the Scottish Government or the UK Government to a public inquiry into undercover political policing north of the border. The Court of Session in late 2018 rejected the Judicial Review. An appeal is being lodged and we are seeking a Costs Expenses Order.

The report and the need for a public inquiry.

This report into undercover political policing in Scotland concludes that there are sufficient and wide enough reasons to justify the need for a public inquiry north of the border.

This attached expert report was made available to the Court in July 2018. The report presents an exploration of material in the public domain augmented with evidence sourced from first-hand accounts from those spied upon. Whilst the report may have lacked access to Police Scotland internal material, and it is not in a position to comment on the conclusions drawn by the HMICS review in any detail, the Report lays out a variety of points indicating involvement in undercover policing operations by legacy Scottish police services.

The report provides a detailed analysis of the extent of undercover political policing at the organisational level, from Scottish staff seconded to crucial positions and at the practical operational level. In addition it critically examines the activities of known undercover officers in Scotland.

The report ends with a few cases of suspected undercover activities, and a section reviewing Scottish police involvement in the blacklisting of trade unionists.

These issues were addressed by the HMICS in their Strategic Review which concluded in 2018 prior to the issue of this report. However, the HMICS report was limited only back to the your 2000 and therefore did not consider the bulk of the material that the attached report considers. The HMICS report is therefore extremely limited in its usefulness. In addition it was not independently researched with the report being produced by the police.

TO CREATE A PRE-FILLED EMAIL CLICK HERE (if the link doesn’t open in your email, you can copy the protest letter details here).