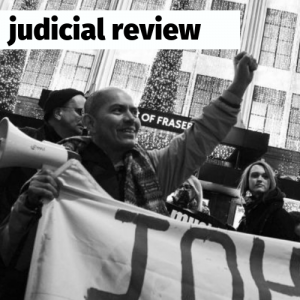 It is important to remember that judicial review is a remedy of last resort: it is only available if there is no other means of challenge, or if all other appeal steps have been exhausted.

In judicial review proceedings the court will consider whether the public body concerned has acted in line with its legal requirements and responsibilities. If the court establishes that the public body has failed in its legal duties then it can declare that the decision taken is unsound.

Judicial review can be a powerful means of holding public authorities to account.

Challenging decisions made by public bodies

Decisions made by public bodies can be challenged by way of judicial review. Public bodies include:

• Government ministers and departments – eg: Department for Work and Pensions, Ministry of Defence

Public bodies are increasingly devolving their functions to other agencies. In most cases these agencies will also be governed by public law.

Can I bring a judicial review?

In order to bring a public law challenge to a decision of a public body by way of judicial review you must have ‘standing.’ This means there must be a close connection between you and the decision or subject matter itself.

Is it too late to bring a judicial review?

Judicial review proceedings must be initiated as soon as possible, and no later than three months of the decision being challenged was taken.

What are the grounds for bringing a judicial review?

Decisions by public bodies can be challenged on a number of bases. For example, it can be argued that:

Some of the principles are outlined below:

Illegality: Public bodies must apply the law that regulates their decisions and actions. They must not only understand the law but apply it properly. It cannot take into account irrelevant factors and when making a decision ignore relevant factors.

Irrationality: It is unlawful for a public body to issue decisions which are unreasonable or irrational.

Proportionality: this is a developing principle of public law. A public body must undertake a balancing exercise between the legitimate aims of the state and the rights of the individual. The test is applied under European law or the Human Rights Act.

Unfairness: Public bodies must not act unfairly. They must not abuse their power. They must follow the law, their policies and procedures. Fairness also demands that in most circumstances the public body gives reasons for its decisions. The public body must be impartial and has a duty to consult before a decision is made. A public body must keep its promises, unless there are good reasons not to.