Another step towards justice for the Shrewsbury 24

With the criminal convictions of members of the Shrewsbury 24 set to be challenged in the Court of Appeal, PILC senior solicitor Paul Heron narrates the legal history of a decades-old miscarriage of justice. 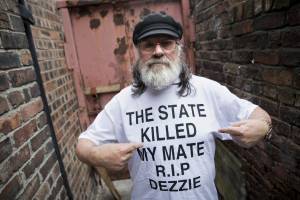 On May 26th 2020 the Criminal Cases Review Commission (CCRC) referred the convictions of Ricky Tomlinson and Arthur Murray to the Court of Appeal for reconsideration.

Ricky and Arthur are two of the Shrewsbury 24. This was a group of ordinary trade unionists who were arrested for their involvement in the national builders’ strike in 1972. In 1973 Ricky, along with Des Warren, was sentenced to prison for unlawful assembly, conspiracy to intimidate and affray.

The Public Interest Law Centre has been instructed by Ricky and Arthur to act for them at their forthcoming Court of Appeal hearing. We have instructed Piers Marquis at Doughty Street Chambers on their behalf.

In addition to Ricky and Arthur, the following cases were also referred by the CCRC on May 26th: Alfred James, Samuel Roy Warburton, Graham Roberts and John Kenneth Seaburg. All four men are deceased and applications to the CCRC were made on their behalf by relatives.

This new legal challenge to the convictions of Ricky Tomlinson, Arthur Murray and their fellow trade unionists would not have been possible without the herculean work of the Shrewsbury 24 Campaign.

The National Builders Strike, the Shrewsbury 24 and a miscarriage of justice.

In the 1970s, working conditions on building sites were both unpleasant and dangerous. Basic facilities were lacking. Health and safety measures were conspicuously absent. On average one building worker died every day in the UK because safety equipment was either not provided or its use not properly enforced.[1]

Attempts by workers to organise union activities or raise health and safety concerns were frequently met with dismissal. Blacklisting was a common practice.[2]

This combustible combination of poor pay and horrendous working conditions led to a national builders’ strike.

The Builders’ Charter Group, a rank and file organisation, was crucial to construction workers’ organising efforts. It pioneered a strategy to organise builders for national action and helped galvanise the main trade unions, UCATT (Union of Construction, Allied Trades and Technicians) and TGWU (Transport and General Workers’ Union), for action.

As a result, a National Joint Council was organised to make demand better wages and working conditions.[3] When these demands were rejected by the National Federation of Building Trades Employers, a national strike was called for May 1972. Eventually, on September 14th 1972, a settlement was reached with the employers for an immediate increase in basic rates of pay.

Between May and September 1972, building sites were picketed as striking workers sought to force the issue.

On 6th September 1972, during the final stages of the dispute, builders from north Wales were asked to go to Shrewsbury to help on the picket line. Coaches were organised and activists visited a number of sites to ensure the strike was solid.

Union activists behaved appropriately in appealing to workers to shut the sites. Des Warren wrote in his account of the strike: “Toward the end of the day, Chief Superintendent Meredith shook my hand and congratulated me on the conduct of the meeting we held. He made no complaint about the activities of the pickets.”[4]

Despite the words of the senior police officer on duty, some of those involved in the pickets were later arrested. These arrests took place months later, apparently as the result of pressure from then-Home Secretary Robert Carr[5] and the National Federation of Building Trades Employers, both of whom were keen to send a warning shot to the labour movement.[6]

Unusually, the trial of the Shewsbury 24 was split into three:[7]

Trial 2 was held at Shrewsbury Crown Court and began on 15th January 1974. Nine trade unionists were charged with unlawful assembly and affray. Brian Williams, Arthur Murray and Mike Pierce were found guilty of both charges and were sentenced to six months’ imprisonment for affray and four months for unlawful assembly.

Trial 3 was held at Shrewsbury Crown Court and began on 26th February 1974. A further nine building workers stood trial on charges of unlawful assembly and affray. Several defendants were given suspended prison sentences.

Appeals against the sentences were submitted immediately. Applications for bail were initially refused by the courts, but later granted. The convictions for affray were quashed. However, the substantive offences were heard by the Court of Appeal.

In October 1974, the Court of Appeal heard the appeals against the convictions for conspiracy to intimidate. The appeals were dismissed. Des Warren and Ricky Tomlinson were returned to prison. On 3rd December 1974 the Court of Appeal considered further applications for leave to appeal to the House of Lords but refused to refer the case.

The unsafeness of the convictions

There are at least three reasons why the convictions of Arthur Murray and Ricky Tomlinson might be considered unsafe.

Further appeals and challenge to the CCRC

In October 2017, the CCRC refused to refer the case for appeal. But following a successful Judicial Review challenge, brought by the law firm Bindmans, the CCRC agreed to revisit its decision.

The matters to be considered by the Court of Appeal

i) new evidence, consisting of a note dated 17 September 1973 and revealing that some original statements had been destroyed. Neither this note, nor the fact that statements were destroyed, was disclosed to the defence at the time of the trial

ii) new legal arguments relating to the screening of The Reds Under the Bed during the 1972 trial, including an analysis, applying modern standards of fairness, of the way the airing of the documentary was handled by the trial judge.

We hope that the Court of Appeal will reward the valiant efforts of the Shrewsbury 24 Campaign by correcting a decades-old miscarriage of justice.