We’ve been working with our friends at Housing Action Southwark and Lambeth (HASL) on a challenge to Lambeth’s unfair and misleading ‘Temp2Settled’ scheme. 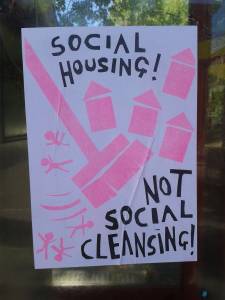 In the second of our series of interviews with PILC solicitors, we spoke to Helen Mowatt about how working with grassroots groups can help lawyers see the bigger picture when it comes to strategic litigation.

Can you tell us a bit about the Temp2Settled case?

When a homeless family presents to Lambeth as homeless, the council gives them a number of options. One option is Lambeth’s Temp2Settled Scheme. Under this scheme, if a household agrees go into private rented sector accommodation rather than council-provided temporary accommodation, the council will put them into a higher band on the housing register. (Councils decide who gets offered housing based on a priority ‘banding’ system. The higher your band the more likely you are to get housed). Families are advised they’ll have a much higher chance of getting permanent accommodation because they’ll be in band B instead of band C.

So what’s the problem?

The problem is it isn’t true! Families often think it sounds like a really good deal and they accept the offer. But what Lambeth council don’t tell them is that if they’re placed in private rented accommodation outside of the borough, they’ll be removed from the waiting list after two years if they haven’t been successful in securing a property.

We’ve got FOI data showing that only 2% of households needing a 2-bedroom property were accommodated through the housing register within a 2-year period. Far from having a better chance of securing permanent accommodation through Temp2Settled Scheme, people have almost no chance of securing accommodation within those two years, at the end of which they’ll be removed from the housing register.

What kind of people are being affected by this?

Many of those affected are families from South London’s Latinx community. The issue tends to affect migrant families for two reasons. One is that they are more likely to be new to the borough so they haven’t had a chance to build up time on the housing register before entering the scheme. The other reason is that—for language reasons—migrant families often don’t understand the nature of the scheme. They might not be aware of whether they’re in private rented accommodation or council temporary accommodation.

What are the potential consequences for families?

One consequence is that if you go down the private rental sector route you’re giving up your right to suitable housing. If there’s something wrong with your accommodation and you’re in the private sector, you don’t have the same rights as if you have a council tenancy. You can’t challenge the suitability of your accommodation in the same way and you don’t have the same rights when threatened with eviction.

So the council is trying to ‘game’ the homelessness statistics by reducing the number of people on the list?

It appears that way. When they issue their homelessness figures they can say ‘we’re doing better than in previous years and we’re doing better than neighbouring boroughs’. Temp2Settled also helps them reduce the number of people they have a responsibility to house and get homeless families out of the borough. This is a big deal in a time of rising homelessness and huge housing shortages.

How have you worked with HASL to bring this challenge?

HASL have great links with the community in Lambeth—in fact, they’re part of the community. This means they can see what’s happening on the ground more easily than, say, a local law centre.

HASL initially referred a domestic violence case to us. We helped get the client into permanent accommodation. Then we started meeting up more and instead of just discussing individual cases we found ourselves talking about the wider situation with housing in Lambeth. Temp2Settled was one of the themes that emerged from those conversations.

One of the reasons we think this hasn’t been picked up before is that housing solicitors tend to work at the ‘micro’ level. They’re meeting clients’ needs case-by-case, so they don’t have time to look at the wider trends that are emerging.

What do schemes like Temp2Settled says about the culture of local authority housing departments—and what outcome are you hoping for from this case?

It appears that this is more than just negligence, but potentially bad faith. There’s a wickedness in the culture of some housing departments. People are seen as numbers and not as people. It doesn’t matter how vulnerable you are or what your circumstances are, the goal is to get the numbers down.
Of course, this mentality is related to the limited housing stock and to austerity. But councils need to be pushing back against that—not passing the pain onto vulnerable people.
Schemes like these also support the gentrification agenda of many London local authorities – it’s in the commercial interests of councils to get as many homeless and low-income families out of the borough as possible

If Lambeth council have deliberately misinformed people in an attempt to get their numbers down, we want them to admit this and apologise. We want all these families to be put back on the register. This would send a huge message to councils—that it’s not acceptable to put your targets ahead of the needs of the community.