Covid-19 and the domestic abuse crisis

What can we expect from the government’s £76m funding pot to support survivors?

A decade of austerity has led to a severe lack of funding for domestic abuse services and a shortage of safe accommodation for those who flee. Specialist organisations have been pushed to breaking point. For survivors, the risk of ill-treatment and even death has increased as a result.

A flurry of open letters were sent to government demanding additional money for domestic abuse services and accommodation. PILC, Solace and more than fifty other organisations wrote to MHCLG. Southall Black Sisters (SBS), Solace, the End Violence Against Women Coalition and others wrote to the prime minister. SBS and Compassion in Politics coordinated a letter to the Chancellor of the Exchequer. Finally, the Step Up Migrant Women campaign, a coalition of more than 40 specialist BAME and migrant frontline services, domestic abuse services, social-justice and human-rights organisations, wrote to Priti Patel calling for emergency support to help migrant victims of domestic abuse during the pandemic. 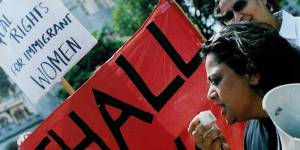 When it became clear that no adequate response was forthcoming, PILC, acting on behalf of Southall Black Sisters and Solace, launched a campaign and legal challenge against the government’s failure to support domestic abuse survivors during Covid-19. Over 750 people sent emails to Priti Patel and Robert Jenrick in support of our campaign.

On 2 May 2020, apparently in response to this sector-wide campaign and the accompanying threat of legal action, the government announced an  additional £76m to support survivors of abuse.

How the £76m breaks down

In total £10m has been allocated to safe accommodation services, with £25m going to help survivors of domestic and sexual abuse access services during the pandemic. £0.7 million will support organisations that provide support to kinship carers, foster carers or to adoption and care leaver provision.   £3m per year until 2022 will fund the work of Independent Sexual Violence Advisers, and a further £3.8m will go to community-based domestic-abuse and modern-slavery services and charities.

The Home Office has also promised £7.8 million in emergency support for charities helping vulnerable children who have been impacted by the coronavirus outbreak, including children at risk of sexual abuse and criminal exploitation. The Department for Education has pledged more than £26.35 million to support vulnerable children, which will go towards supporting the families of disabled children and work to safeguard groups including care leavers and children in the early years.

This funding commitment is a welcome concession. But the fight is far from over. It remains to be seen whether the £10 million allocated to safe accommodation services will be sufficient to cater to the ever-increasing demand, or whether the government will prioritise those organisations that need it most, including BME and migrant-specialist organisations.

Will the government provide adequate funding for services led ‘by and for’ BME women? Or will these vital services be overlooked as they so often are by current funding streams?

Domestic abuse impacts women across society. But those without the financial or physical means to leave are disproportionately affected. BME and migrant women face structural barriers to accessing support when they experience domestic abuse. As a result, they experience higher rates of domestic homicide and are three times more likely to commit suicide than other women in the UK. Some 50% of BME and migrant-women victims of violence experience abuse from multiple perpetrators.

Survivors with insecure immigration status are often prevented from accessing safe accommodation. Women with No Recourse to Public Funds (NRPF) are not eligible for most refuge provision. Under usual circumstances, migrant women on spousal visas can apply for the Destitution Domestic Violence Concession (DDVC), allowing access basic benefits and social housing. But under pandemic conditions, accessing the DDVC will be practically difficult, especially for those women forced to self-isolate with perpetrators. Women with NRPF who are not on spousal visas are barred from applying for the DDVC altogether.

Insecure immigration status is also a significant barrier to the disclosure of domestic abuse. Many migrant women are justifiably fearful that if they report abuse to the police or seek medical assistance, they could be penalised, detained or even deported. This allows some perpetrators to use their partner’s immigration status as an additional form of coercive control.

We know from discussions with specialists BME and migrant organisations that, behind closed doors, the Home Office has acknowledged  the NRPF requirement to be a structural barrier preventing migrant women seeking protection and support when they experience domestic abuse. If that is the case, the government’s lack of protection for migrant women in the context of Covid-19 is even more scandalous.

The £76 million pledged by the Home Office is a step in the right direction. But on its own this money it will do nothing to ensure that all migrant women who suffer abuse can access safe accommodation, regardless of their immigration status. We must continue to fight to ensure that the government prioritises those organisations that need it most, and BME- and migrant-specialist services in particular. We must also push hard for the abolition of NRPF so that nobody’s life is put in danger for want of the right papers.