With an ‘independent’ review of judicial review underway, PILC senior solicitor Paul Heron blogs about the need to defend access to justice from ideological attack.

The government is at war with public law. 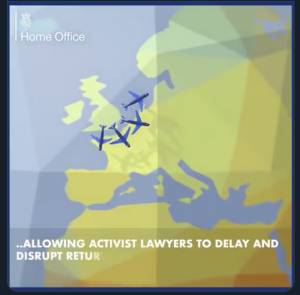 On 27th August, the Home Office complained that ‘activist lawyers’ were ‘delaying and disrupting’ the operations of the UK immigration system. The claims, made in a video that was later deleted, came in response to judicial review challenges brought on behalf of desperate migrants to prevent their potentially unlawful removal from the UK.

Even the Law Society, so often a poodle to the Ministry of Justice, was forced to yelp, reminding the Home Office that:

[s]olicitors advise their clients on their rights under the laws created by Parliament. To describe lawyers who are upholding the law as ‘activist lawyers’ is misleading and dangerous. We should proud that we live in a country where legal rights cannot be overridden without due process, and we should be proud that we have legal professionals who serve the rule of law.

The government does not seem to agree. By announcing a review of judicial review, it has signalled its intention to reel back access to justice by further limiting the power of the courts to hold public bodies to account.

Some believe this is the government’s revenge for the Supreme Court’s interference with Boris Johnson’s prorogation of Parliament over Brexit. But while that may be a factor, it is not the only reason why judicial review is under attack.

Neo-liberalism and the law

The justice system does not operate in a vacuum. Law operates under the same socio-economic pressures as society as a whole. We live in an era of neoliberalism, during which access to justice has come under severe threat along with a range of other democratic rights.

Since the late 1970s, most of the Global North has moved from a position where state ownership undergirded national economies to one in which market forces hold sway. Under Thatcher and Reagan, radical economic reforms stripped away state support for industry while protecting private interests on behalf of the 1%. In the UK this meant bringing to heel the power of the trade unions. Collective bargaining and the closed shop were among the targets of a concerted assault on the power of organised labour. Over the past forty years, privatisation and deregulation have been the keynotes of economic policy in the UK, leading to mass unemployment, poverty, and a huge increase in the gap between rich and the poor.

Neo-liberalism was, and is, a political project carried out by the corporate capitalist class in reaction to the growing political power of the organised working class and other progressive forces. Its success as an economic and social ideology has been underwritten by counter-reforms and regressive legislation.

It is no accident that welfare provision, wages and the ability of the working class to organise have been simultaneously assailed.  Capitalist economics forms the foundation upon which legislative reform is based, as well as providing the framework within which it operates.

The current system is far from perfect. The law courts are unfavourable terrain for socialist and progressive movements. To cite just one example, the Communication Workers Union (CWU), which represents postal workers, recently had a democratic strike ballot overturned.

But the courts have been a vehicle for small and significant victories. In 2017, the Gureckis judgment overturned a policy that targeted EU rough sleepers for deportation, with the High Court finding it to be in breach of EU and human-rights law.

Perhaps in response to such challenges, the 2019 Conservative manifesto had judicial review in its sights:

After Brexit we also need to look at the broader aspects of our constitution: the relationship between the Government, Parliament and the courts; the functioning of the Royal Prerogative; the role of the House of Lords; and access to justice for ordinary people. The ability of our security services to defend us against terrorism and organised crime is critical. We will update the Human Rights Act and administrative law to ensure that there is a proper balance between the rights of individuals, our vital national security and effective government. We will ensure that judicial review is available to protect the rights of the individuals against an overbearing state, while ensuring that it is not abused to conduct politics by another means or to create needless delays.

Judicial review in its current form provides a fairly minimal check on the powers of government. Yet the government is apparently intent on reducing its influence further.

The terms of reference for the review of judicial review are as follows:

The review […] will consider whether the right balance is being struck between the rights of citizens to challenge executive decisions and the need for effective and efficient government.

The move delivers on a manifesto commitment to ensure the judicial review process is not open to abuse and delay.

Specifically, the review will consider:

The review will be conducted by a nominally ‘independent’ panel, but there are doubts about how independent this panel will actually be. It is chaired by Lord Faulks, a Tory peer who was a justice minister during Chris Grayling’s catastrophic tenure as Justice Secretary. Lord Faulks has written critically on the subject of the role and power of the courts, including an attack on the Supreme Court’s ruling on the unlawful prorogation of parliament.

The panel also includes two barristers from 39 Essex Chambers, who have historically acted for the government in Judicial Review cases. Where are the barristers from Garden Court or Doughty Street, who typically act for claimants?

Judicial review in its current form is imperfect and exclusionary. There are major risks involved in bringing a case against a public body. Access to legal aid is severely restricted, with the Legal Aid Agency (LAA) carefully scrutinising what they perceive as  ‘political cases’. The issue of costs can be prohibitive.

Judges, meanwhile, are often biased—not a great deal has changed since Ralph Miliband wrote, in 1969, that:

the judicial elites, like other elites of the state system, are mainly drawn from the upper and middle layers of society: and those judges who are not have clearly come to belong to these layers by the time they reach the bench. Moreover the conservative bias which their class situation is thus likely to create is here strongly reinforced by the fact that judges are, in many of these systems, also recruited from the legal profession, whose ideological dispositions are traditionally cast in a highly conservative mould.[1]

Reform of the legal system is long overdue. But the government’s ‘independent’ review is not being conducted with the aim of increasing access to justice. Any changes that come out of it are likely to hinder the work of social-justice lawyers while failing to protect claimants from excessive costs.

We must keep a watchful eye on the government’s review of judicial review— and be ready to fight, not in defence of an imperfect system, but for the expansion of access to justice for all.