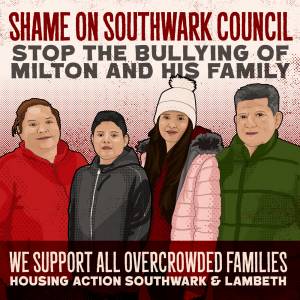 At the beginning of October PILC issued a claim for permission to apply for judicial review of Southwark council’s housing allocations policy.

In the first in a new series of Q&As on PILC legal cases, we outline the basis for the challenge as well as exploring the wider implications of our client’s case.

Our client, Milton, lives with his wife, son and daughter in a privately rented studio apartment in Southwark. They are severely overcrowded and have endured extremely cramped housing conditions for almost five years.

The family applied to join Southwark’s housing register in April 2018. However, Southwark has refused to prioritise the family’s application for housing. The council claims that the family’s overcrowding is the result of a ‘deliberate act’.

Why is this a problem?

Priority on the housing register is determined by band. Southwark’s housing allocation policy awards the highest band (Band 1) to applicants who, like Milton and his family, are statutorily overcrowded.

This policy is in line with the council’s obligations under Part VI of the Housing Act 1996, which states that ‘reasonable preference’ must be given to people living in overcrowded housing.

However, there is an exception in Southwark’s housing allocation policy for people who have caused their overcrowding by a ‘deliberate act’, who are to be deprioritised.

Southwark accept that Milton and his family are statutorily overcrowded. But they claim this is the result of a ‘deliberate act’ on their part. In making this decision they have relied on an unpublished policy which appears to state that anyone who moves into accommodation that becomes overcrowded at the point at which they move in should be considered to have caused that overcrowding by a ‘deliberate act’.

However, Milton and his family had no choice but to move into their current accommodation.  As Milton explains with the help of his daughter Rebecca: ‘I had to move to this flat. When we looked at other places the agencies asked us for many months’ rent in advance. I couldn’t rent a bigger house because it was too expensive.’

How has overcrowding affected Milton and his family? 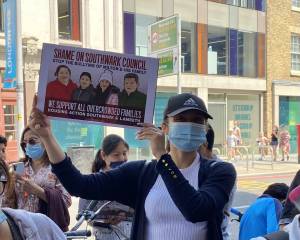 Being overcrowded is affecting the whole family’s mental health, as well as making it difficult for the children to study.

As Milton explains: ‘My children cannot study in this environment. During the pandemic they had to take classes online at the same time. They found it difficult to listen and concentrate in class because they were in the same room.’

‘We do not have any privacy, either: we have to go to the bathroom to change.’

What are the grounds for our legal challenge?

PILC is arguing that Milton and his family had no choice but to move into their current accommodation and therefore should not be penalised and deprioritised.

The legal grounds for our challenge are that:

What wider issues does this challenge raise? 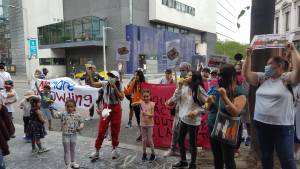 This is not the first time Southwark has blamed low-income families for their overcrowding. In December 2020, another family successfully challenged a ‘deliberate act’ decision.

Such cases raise broader issues relating to the chronic shortage of decent housing for low-income families in London, and the ‘social cleansing’ of migrant communities and communities of colour from central areas of the city.

It is now incredibly difficult for low-income Londoners to access secure, long term social housing.  Families find themselves stuck for years in temporary accommodation that is either too small for their needs or miles away from children’s schools or parent’s workplaces. In the private rented sector levels of overcrowding have almost doubled in the last ten years due to a combination of rent rises and benefit cuts.

As Sam Tippet, a PILC paralegal working on the case, explains: ‘This case is a clear example of how Southwark continues to penalise working-class families. Milton’s family have spent almost five years living in accommodation so severely overcrowded they are legally homeless. Like so many others, they are being punished for earning too little money to live safely in London.’

‘Southwark continues to have too little housing stock for social tenants. This is the result of the longstanding failure of local and national government to resource adequate accommodation for people on low incomes. Even if successful, our legal challenge will not resolve this problem. There is an urgent need both to increase the provision of social housing and introduce rent controls to ensure private tenants can afford a decent home.’

Councils are also using ‘gatekeeping’ tactics to deter low-income and homeless households from accessing support to which they are legally entitled. There is an established culture of disbelief in housing offices, with families routinely being accused of fraud or of causing their own housing problems. Such issues disproportionately affect migrant communities and communities of colour, who are more likely than other groups to be homeless and live in poor housing. 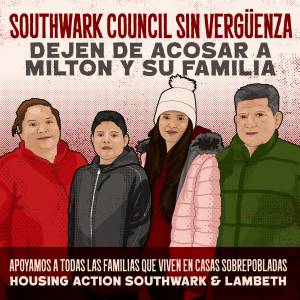 As Izzy Koksal from Housing Action Southwark and Lambeth (HASL)—the local housing campaign group that Milton is part of—puts it: ‘We are all too familiar with these cruel and insulting decisions from the council, which blame migrant families and families of colour for living in overcrowded housing. We have successfully overturned many of them with the help of PILC. Our members will continue to campaign for an end to the use of ‘deliberate act’ and this culture of blame and refusal.’