Spy cops in the Troops Out Movement

Published On: 4th May 2021Categories: Spycops 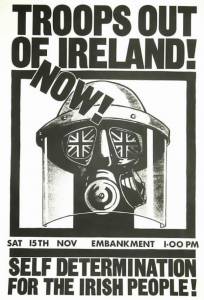 Our latest blog from the Undercover Policing Inquiry looks back at the infiltration of the Troops Out Movement, a campaigning organisation committed to bringing an end to British rule in the north of Ireland.

On 5 May 2021 our client Richard Chessum is due to give witness evidence to the Undercover Policing Inquiry (UCPI). Richard was an activist in the Troops Out Movement who was befriended and reported on by Rick Gibson (real name Richard Clark), a police officer sent to spy on the organisation.

The Troops Out Movement was formed in West London in September 1973 by Irish solidarity activists, trade unionists, socialists and Irish people living in Britain. It was a campaigning organisation committed to bringing an end to British rule in the north of Ireland.

Those who gathered at the founding meeting of the Troops Out Movement were appalled at the effects of British rule in the north of Ireland. They wanted to show their solidarity with the Irish people and their  opposition to the occupation. Within a year the movement had branches all over Britain.

The movement was not implicated in any public disorder. It was a democratic campaigning organisation, based in Britain and dedicated to raising concerns about human-rights abuses in the north of Ireland.

Opposing the occupation of Ireland

For people living in Britain in the 1970s and 1980s without family or cultural ties to Ireland, making the leap from vague disquiet about the British army’s actions in Ireland to committed activism was no easy step. As is often the case with the media and government today, the full picture of events in Ireland was not always given. Where political events in Ireland were not ignored, they were often seriously misrepresented.

There is nonetheless a long tradition in Britain of opposition to the occupation of Ireland. The Troops Out Movement could trace its roots back as far as 1647, when the radical group the Levellers published The English Soldiers’ Standard, in which they set out their belief that Ireland should be free.

In 1649, inspired by the Levellers, a group of English soldiers mutinied rather than go with Oliver Cromwell and his army to take part in the slaughter of Irish people. The soldiers published a pamphlet setting out their demands. They asked: ‘What have we to do in Ireland, to fight and murder a people and a nation… which have done us no harm? We have waded too far in that crimson stream already of innocent and Christian blood.’

Over the centuries various campaigns demanded independence for Ireland. The Fenian movement was strong in parts of northern England in the 1860s. There was support for a Home Rule Movement in the 1870s. The failure of the Easter Uprising in 1916 led to the development of the Irish Self Determination League, and later, in the 1960s, the Anti-Internment League.

Spy cops in the movement

Shortly after its formation, the Troops Out Movement was infiltrated by officers of the Metropolitan Police’s Special Demonstration Squad (SDS), which dedicated significant resources to infiltrating mainly progressive and left-wing organisations. Officers using assumed names reported on local, regional and national meetings. One officer, Rick Gibson, took a leading position in the Troops Out Movement.

Like other activists involved in opposition to the British state, members of the Troops Out Movement have faced their fair share of police harassment, including when travelling to and from Ireland. In some cases—usually in the wake of IRA activity in England—members of the movement had their houses raided by the police. Police would comb through books, photographs and personal paperwork in an attempt to gather intelligence.

Despite the best efforts of political policing to derail the Troops Out Movement,  evidence suggests its campaigning was effective. Opinion polls taken in Britain have consistently shown a majority of the public in favour of British military withdrawal from the north of Ireland.

An opening statement to the UCPI on the activities of the officer who infiltrated the Troops Out movement can be viewed here.