Spycops in CND: help us fill in the gaps! 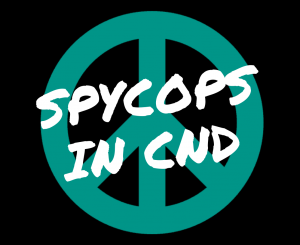 In July 2021 the Campaign for Nuclear Disarmament (CND) was granted Core Participant status in the ongoing Under Cover Policing Inquiry (UCPI). PILC’s Paul Heron has been appointed by the Inquiry as registered legal representative for CND.

In our latest blog, Saskia O’Hara looks at the campaigning history of CND and appeals for information about the officers who spied on the organisation.

CND is a mass peaceful democratic movement which has weaved itself into public consciousness and become part of the fabric of UK society. From the Cuban missile crisis and the Vietnam War to the surge in re-armament under Ronald Reagan and beyond, it has consistently opposed the use of nuclear weapons over more than fifty years. CND’s iconic symbol is recognised across the globe.

CND’s political importance is reflected in the group having been a prominent target of the Special Demonstration Squad (SDS) of the Metropolitan Police during the 1980s. Next year, Tranche 2 of the Under Cover Policing Inquiry will look at SDS deployments in the years 1983-1992, when CND was at the height of its campaigning influence.

Initial disclosure shows the extent to which CND was infiltrated to be far greater than previously thought. CND will also feature in Tranche 6 of the Inquiry, which covers spying by the security services. Much about the activities of the undercover officers who infiltrated CND is still not unknown.

CND was born out of an article in the New Statesman which called for unilateral nuclear disarmament. The article provoked such a positive response that the magazine’s editor suggested the need for a mass movement against nuclear weapons.  This call was heeded and CND was born in February 1958.  A meeting attended by 5000 people resolved that Britain must:

a) Renounce unconditionally the use or production of nuclear weapons and refuse to allow their use by others in her defence.

b) Use her utmost endeavour to bring about negotiations at all levels for agreement to end the armaments race and to lead to a general disarmament convention.

c) Invite the co-operation of other nations, particularly non-nuclear powers, in her renunciation of nuclear weapons.

In the 1980s—the period which the UCPI will focus on—CND held some of the biggest demonstrations in British history.  In 1983 it organised an anti-nuclear protest in London that was attended by over 200,000 people.  As Joan Ruddock, then-chair of the CND, put it:  “The demonstration put paid to the notion that the peace movement is on its last legs.”

Despite the large numbers involved, Special Branch reports on these demonstrations repeatedly emphasise the low risk of public disorder.  Of the protest against nuclear missiles in London, police files state that “the vast majority of the 200,000 or so persons attending this event were pacifists with no overt leanings to extremist, subversive or political groups [sic].”

If Special Branch recognised the majority of CND’s members as ‘pacifists’, on what grounds was the organisation infiltrated?  This is the first of many questions the Inquiry will need to answer.

Did you know ‘Timothy Spence’ or ‘John Kerry’?

In granting Core Participant status to CND, the UCPI has identified two undercover police officers who targeted the group. Between 1981 and 1984, ‘Timothy Spence’ (HN88) is understood to have infiltrated CND in east London. (This officer is also believed to have infiltrated the Stoke Newington and Hackney Defence Campaign and the Hackney Campaign against the Police Bill)

Undercover officer ‘John Kerry’ (HN65) also infiltrated CND between 1980 to 1984—we suspect in the national office.

Little is publicly known about these officers as we await further disclosure from the Inquiry.

We would therefore urgently like to hear from CND members from that period who may have been in contact with—or indeed who know anything about—‘Timothy Spence’ or ‘John Kerry’.

In addition to these two officers, we believe a number of other police spies attended meetings and involved themselves in CND as part of their overall cover. It would appear that multiple officers used CND to ‘build up their profile’ as they sought to target other progressive campaigning organisations.

If you have any information relating to the activities of ‘Timothy Spence’ or ‘John Kerry’, please contact paul.heron@pilc.org.uk so that this information can be brought before the Inquiry.