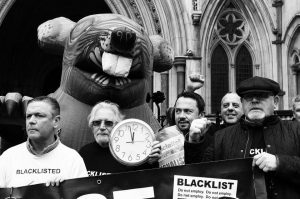 Blacklisted workers outside the Royal Courts of Justice.

We also represent Youth against Racism in Europe (YRE), a major anti-racist and anti-fascist organisation that was infiltrated by undercover police in the 1990s, as well as several other activists and trade unionists whose case are currently under review.

On 12 March 2015 then-Home Secretary Theresa May announced her intention to establish an Inquiry into undercover policing. On 16 July 2015 the Inquiry’s terms of reference were published.

The Chairman delivered his opening remarks on 28 July 2015.

The Inquiry was announced following reports in the UK media in 2010 that a number of undercover police officers had created false identities in order to infiltrate trade unions, political parties, and campaign groups. The officers in question formed deceitful relationships with women members of these groups with and, in some cases, proposed marriage or fathered children with protesters, who remained unaware their partner was a police officer.

There are many lessons can be learned through the inquiry, which is due to issue its findings in 2023. Above all, there needs to be justice and accountability for the many activist core participants.

Some of the main areas the Inquiry needs consider include:

It is now established that undercover officers routinely had long-term, intimate relationships with women they were sent to spy on. More than one had children with women under their surveillance.

Undercover police officers spied on family justice campaigns, including those founded in memory of Stephen Lawrence, Jean Charles de Menezes, Joy Gardner and Ricky Reel. The Inquiry needs to consider what led to resources that should have been deployed holding to account those responsible for racist murders and police misconduct instead being used to undermine campaigns for justice.

It has been established by the Independent Police Complaints Commission (now the Independent Office for Police Conduct) that Special Branch routinely and illegally supplied information on trade unionists to facilitate a construction industry blacklist.

The Blacklist Support Group has consistently argued for a separate public inquiry into this scandal.

Undercover officers would often steal the identity of a dead child as part of the process of building a credible persona.

In February 2013, a Home Affairs Select Committee report into undercover policing insisted that all families affected be informed and receive ‘a full and unambiguous apology’. The police have identified more than 40 such cases.

Undercover political police spied on elected representatives. Approximately ten such MPs, including former shadow Home Secretary Diane Abbott MP, have been named. Most of them, including our client Dave Nellist, are current or former members of the Socialist Campaign Group of Labour MPs.